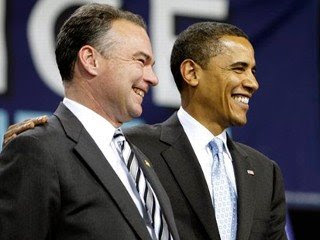 Nobody has been able to identify a single House member who’s running an ad boasting of a “yes” vote on Obamacare. Sixty-one percent (61%) of Likely U.S. Voters favor repeal of the law. DNC Chairman Tim Kaine is making a fool of himself.

Several House Democrats who voted against the health care overhaul earlier this year are now touting their “no” vote back home, but Democratic National Committee Chairman Tim Kaine said the legislation is beneficial to the party’s chances this November as a whole.

“I travel all over the country. I guess I’ve been in about 42 states, and most Democrats that I see on the trail are very proud of the accomplishment and they’re talking about it,” he said on CNN’s “State of The Union” with Candy Crowley Sunday.