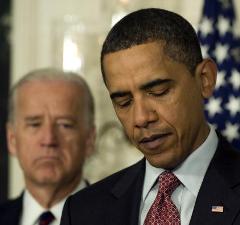 The Illinois poll we’ll release this week won’t do much to change the conventional wisdom on either the Senate or Gubernatorial race in the state but it does have one pretty surprising finding: Barack Obama’s approval numbers have dropped into negative territory even with likely voters in his home state. 44% approve of the job he’s doing while 49% say they disapprove.

I thought you were talking about Nigeria.

I thought you were talking about Nigeria.