Pelosi is too liberal for some Democrats 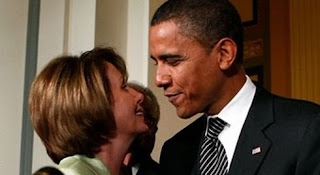 Now that Democrats jobs are on the line because of the liberal agenda Nancy Pelosi rammed through the House, some more conservative Democrats are rethinking her leadership.

If Rep. Gene Taylor had his way, Rep. Ike Skelton would replace Nancy Pelosi as Speaker next year.

Taylor told The Hill that he’d like to see Skelton, a Missouri Democrat and chairman of the House Armed Services Committee, succeed Speaker Nancy Pelosi (D-Calif.) if Democrats retain a slimmer hold on the House after the November elections.

Taylor’s suggestion reflects a broader sentiment among conservative Democrats that Pelosi is too liberal and indicates she may not win unanimous support from the caucus in 2011, as she did in 2007 and 2009. A number of House Democrats in tight re-election battles, including Reps. Bobby Bright (Ala.), Walt Minnick (Idaho), and Chet Edwards (Texas), have not committed to voting for Pelosi as Speaker.