Al Sharpton: Black unemployment is high because of Republicans or something... 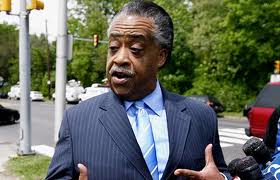 Here is what Al Sharpton really meant to say: "Those Republicans must be raaaaciist!!!!"

One of the reasons those jobs have gone down, or have remained down is one the Republicans are cutting a lot of the agencies, where we are the employees are government jobs, government employed and a lot of those jobs go through governors and mayors who are also have had cutbacks. So what we’ve got to do and we addressed that to the President is take on these governors and mayors as well as the private sector on why the private sector is getting all these contract and bailouts and not hiring and correcting the disproportionate amount of their employment does not touch our community and have the President and them support us in that.”