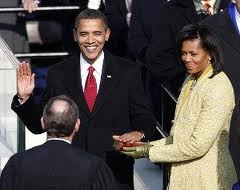 
President Obama is considering allowing corporate donors to help fund his inauguration in 2013, a possible reversal of his 2009 ban on such donations, which was then meant as a symbolic gesture, the Wall Street Journal reports.

In 2009, the president raised over $50 million from donors, sans any contributions from corporate donors, to fund his inauguration.

But he did not pursue corporate donors, “a gesture meant to show that well-heeled interests wouldn’t have undue influence in his administration,” according to the Wall Street Journal.

The White House wouldn’t make public the cost of the upcoming ceremony, and wouldn’t indicate what Obama’s fundraising target is this time. The President’s fundraising pays for many of the events and celebrations surrounding the inauguration.