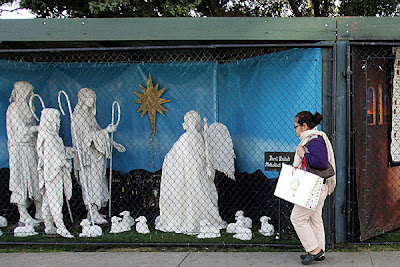 Why do atheists even care if there is a Nativity scene in a park?  Are they that easily offended? They are giving good atheists a bad name...


LOS ANGELES (AP) – There’s no room for the baby Jesus, the manger or the wise men this Christmas in a Santa Monica park following a judge’s ruling Monday against churches that tried to keep a 60-year Nativity tradition alive after atheists stole the show with anti-God messages.

U.S. District Judge Audrey B. Collins rejected a motion from the Santa Monica Nativity Scenes Committee to allow the religious display this season while their lawsuit plays out against the city.

Collins said the city was within its constitutional right to eliminate the exemption that had allowed the Nativity at the oceanfront Palisades Park because the change affected all comers – from Christians to Jews to atheists – and provided other avenues for public religious speech.

The coalition of churches that had put on the life-sized, 14-booth Nativity display for decades argued the city banned it rather than referee a religious dispute that began three years ago when atheists first set up their anti-God message alongside the Christmas diorama.