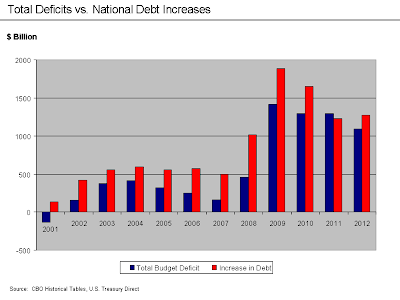 Obama claims his plan is 2-1 spending cuts to tax increases. That is smoke and mirrors. Obama's plan uses already planned reductions in war spending as the biggest part of his savings. He really only proposes $577 billion in cuts over 10 years.  That amounts to about a 1.5% cut in spending...


Now, according to Obama’s math, his “balanced” plan cuts the projected cumulative debt by $4.4 trillion over ten years with 36% of the reduction coming from $1.6 trillion in tax increases — 80% from wealthier Americans, 20% from business. So, basically, $2 in spending cuts for each $1 in tax hikes. “Balanced.”
But once you begin to dig into the numbers, the plan doesn’t look balanced at all. As the bipartisan Committee for a Responsible Federal Budget noted back then:


The Administration claims that the plan would save about $4.4 trillion in total (including interest savings, war savings, and the costs of the jobs proposals). However … counting the war savings is counting a policy that is already in place and is thus a gimmick to be avoided. Taking out the war savings and savings from the discretionary cuts in the Budget Control Act leads to total savings of less than $2 trillion.