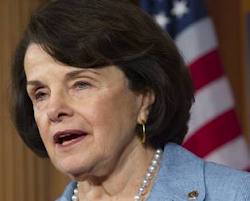 Is Senator Feinstein the only person in America who thinks this is a good idea?


The Democratic chairwoman of the Senate Intelligence committee has commissioned a federal report to identify prison facilities in the U.S. that are suitable for housing Guantanamo detainees, a document exclusively reviewed by Fox News shows.

In the internal document, the Government Accountability Office refers to “Source of Work: Ms. Dianne Feinstein, Chair, Select Committee on Intelligence, U.S. Senate” and lists the “Gist of Work” as an investigation into whether domestic facilities could house the approximately 170 detainees remaining at the controversial facility in Guantanamo Bay, Cuba.

Two hours after Fox News’ inquiry about the report, Feinstein’s office posted the report online and released a statement confirming that the California senator thinks the Obama administration’s controversial plan to relocate detainees to the United States is a viable option.

“This report demonstrates that if the political will exists, we could finally close Guantanamo without imperiling our national security,” Feinstein said. “The GAO report makes clear that numerous prisons exist inside the United States — operated by both the Department of Defense and the Department of Justice—capable of holding the 166 detainees who remain at Guantanamo in an environment that meets the security requirements.”