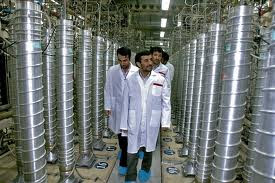 Does Barack Hussein Obama even care?


VIENNA – Iran is ready to sharply expand its uranium enrichment in an underground site after installing all the centrifuges it was built for, a UN nuclear report showed on Friday, a development likely to fuel Western alarm over Tehran’s nuclear aims.

The Islamic state has put in place nearly 2,800 centrifuges that the Fordow enrichment site, buried deep inside a mountain, was designed for and could soon double the number of them operating to almost 1,400, according to the confidential International Atomic Energy Agency report obtained by Reuters.

Tehran has produced about 233 kg (512 pounds) of higher-grade enriched uranium since 2010, an increase of 43 kg since August this year, according to the report issued in Vienna.

The Iranians have used 96 kg of the uranium refined to 20 percent of fissile purity for conversion into fuel for its medical research reactor in Tehran, the report said.

Such conversions make it harder for the material to be processed into 90 percent, or bomb-grade, enriched uranium and could be a step by Tehran meant in part to counter Western suspicions of a covert atomic bomb program.