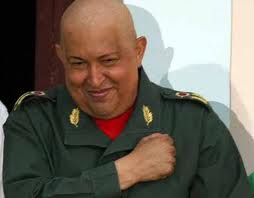 When his cancer became a hot topic three months before this years election, Hugo Chavez declared himself cancer free.


CARACAS (Reuters) - Venezuelan President Hugo Chavez on Monday declared himself fully recovered from cancer and ready to return to the streets for his re-election campaign ahead of an October vote. "Free, free, totally free," an ebullient Chavez told reporters when asked if he was free of the disease that struck a year ago.

Now that the election is over, the cancer seems to have returned. Let's hope it kills him soon.


CARACAS, Venezuela – The newly re-elected Venezuelan President Hugo Chávez will head back for another round of treatment to combat pelvic cancer that has plagued the world leaders for almost two years. Chávez has asked his country's legislature Tuesday for permission to travel to Cuba for more medical treatment after spending much of the past 18 months fighting cancer. The Tuesday request says Chávez has needed "various sessions of hyperbaric oxygenation" and physical therapy to continue "consolidating the process of strengthening health." The request doesn't provide more details about the treatment.