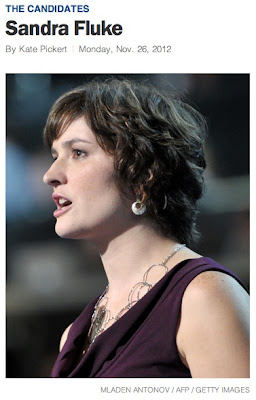 Sandra Fluke has been nominated for TIME’s Person of the Year 2012 for being too stupid to find her way to Target and get birth control for $9 a month.


The daughter of a conservative Christian pastor, Sandra Fluke, 31, became a women’s-rights activist in college and continued her advocacy as a law student at Georgetown. After she complained about being denied a chance to testify at a Republican-run House hearing on insurance coverage for birth control, Rush Limbaugh called Fluke a “slut.” Democrats and many Republicans reacted with outrage, and the left made Limbaugh’s slur Exhibit A in what they called a GOP “war on women.” Fluke, meanwhile, weathered the attention with poise and maturity and emerged as a political celebrity. Democrats gave her a national-convention speaking slot as part of their push to make reproductive rights a central issue in the 2012 presidential campaign — one that helped Barack Obama trounce Mitt Romney among single women on Election Day.