Unlikely: Ahmadinejad claims Israel had no choice but to “bow” to Palestinian rights 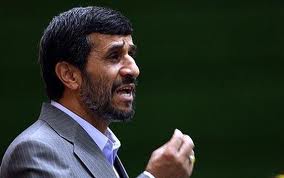 When Iran is on the receiving end of an Israeli attack, we will see who will bow...


(Reuters) – Iranian President Mahmoud Ahmadinejad told the head of the Hamas government in Gaza on Saturday that eight days of cross-border fighting showed that Israel had no choice but to “bow” to Palestinian rights, according to Iran’s IRNA news agency.

The Iranian-backed Hamas has basked in what it called a victory against Israel after an Egyptian-brokered ceasefire on Thursday ended the conflict in which 163 Palestinians and six Israelis were killed.

“Zionists have reached the dead point and have no other alternative but officially recognizing and bowing to the absolute right of the Palestinian nation,” IRNA quoted Ahmadinejad as saying, referring to Israel.