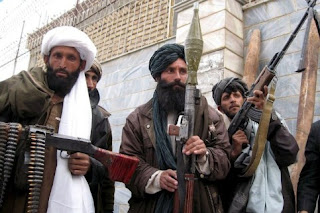 Everyone who disagrees with them is an infidel...


(PressTV) — Thousands of Pakistani Shia Muslims are now receiving death threat text messages on their cellphones as pro-Taliban militants step up deadly campaign against the community members across the violence-ravaged country.

“Kill, Kill, Shias,” say the text warnings to members of the community.

The smear campaign comes a day after nearly 40 Shia Muslims were killed in three bomb attacks on religious gatherings in the southern port city of Karachi and the garrison city of Rawalpindi on Wednesday evening.

Heavily armed militants have targeted several religious ceremonies commemorating the martyrdom of Imam Hussain (peace be upon him) in different regions of Pakistan over the past week.

Human rights groups say hundreds of Shia Muslims have been killed in the violence-hit country so far this year.

Several citizens have expressed their deep concerns over the ongoing massacre and religious persecution of Shias across Pakistan.

Email ThisBlogThis!Share to TwitterShare to FacebookShare to Pinterest
Labels: Taliban