Hamas Leader to Egypt and Iran: Thanks for helping make “Israel scream with pain” 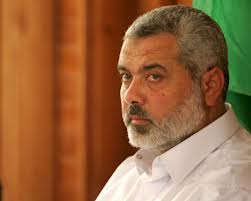 I'll bet he was hiding lake a terrified schoolgirl a couple of days ago...


After emerging unscathed from eight days of fighting with Israel, Hamas leader Ismail Haniyeh thanked Egypt and Iran on Thursday for their support in helping make “Israel scream with pain,” he said.

Haniyeh, who heads Hamas in Gaza, hailed the previous night’s ceasefire as a victory, despite what Israel called heavy losses for the terror group during Operation Pillar of Defense. …

It was “the resistance and strength of the Palestinian people that stopped Israel from sending troops into Gaza,” Haniyeh said at a celebration in Gaza Thursday, which was declared a holiday for Palestinians. “The idea of attacking Gaza is gone and, with the help of God, will never return,” Haniyeh said.