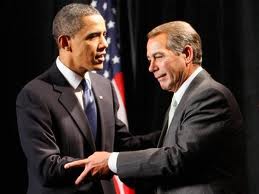 John Boehner doesn't have the big fuzzies to stick with that position...


President Obama’s signature healthcare law has to be on the table for cuts as Congress tried to negotiate a deal to avoid the “fiscal cliff,” House Speaker John Boehner (R-Ohio) wrote in an op-ed.

“We can’t afford it, and we can’t afford to leave it intact,” Boehner wrote in the Cincinnati Enquirer. “That’s why I’ve been clear that the law has to stay on the table as both parties discuss ways to solve our nation’s massive debt challenge.”

Republicans have already made clear that they hope to go after the law’s insurance subsidies in upcoming debt talks. The subsidies represent billions of dollars that will, in 2014, help the uninsured pay for private insurance coverage. But Republicans want to cut into the subsidies to help pay for a fiscal-cliff agreement.

Boehner went on to argue that the push to repeal the Affordable Care Act will be aided by strict congressional oversight. He also praised Ohio Gov. John Kasich (R-Ohio) for refusing to implement a state-based insurance exchange, but neglected to mention that the choice invites the federal government to operate Ohio’s exchange.