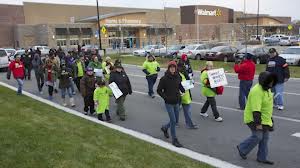 The few scattered protesters in the parking lot were AstroTurfed...

At a Walmart on Chicago's South side, just one employee from the store's nearly 500 staff took part in the demonstration, according to Wal-Mart Stores Inc, the world's largest retailer.

Outside the store, four busloads of protesters chanted in a demonstration that started almost an hour later than planned. The demonstration was peaceful, according to police and store security.

OUR Walmart said it counted 1,000 protests in 46 U.S. states, including strikes in 100 cities - figures that Walmart said were "grossly exaggerated."

Many of the demonstrators were not Walmart workers, but were supporters such as Candice Justice, a retired teacher who stood with dozens of others in Chicago on Friday morning.

"We estimate that less than 50 associates participated in the protest nationwide. In fact, this year, roughly the same number of associates missed their scheduled shift as last year," Walmart U.S. Chief Executive Bill Simon said in a statement.