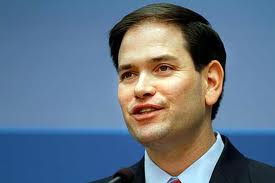 
ALTOONA, Iowa – As the Republican Party regroups after Mitt Romney’s defeat, the message Saturday night at Iowa Republican Gov. Terry Branstad’s birthday fundraiser was “turn the page” and “look to the future” — and what that future apparently holds is Florida Sen. Marco Rubio, the event’s featured speaker.

Rubio was invited to speak at the event around Sept. 1, Branstad told The Daily Caller, and had Romney won, the atmosphere might have been a bit different. But only 11 days after voters went to the polls and Republicans came up short, Rubio was speaking to a crowd that had trained its sights squarely on 2016.

In his speech, Rubio weaved together the personal and the economic. He discussed the importance of a stable family life to a stable economy, and how critical the success of the middle class is not just to the country’s financial situation, but also to its place in the world. American exceptionalism, Rubio said, is important to every nation, not just the United States.