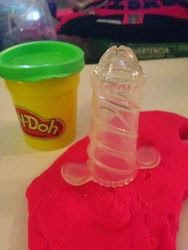 You don't have to be Captain Obvious to know why this was a bad idea.


She was accused by her fiance’s mother of letting her 5-year-old granddaughter play with a sex toy. A mortified Carbrera asked the child where she got the penis-shaped plastic cylinder.
“It’s from my Play-Doh,” the girl replied.
Hasbro, the Pawtucket-based toy company, is now doing damage control over the extruder tool in its Play-Doh Cake Mountain toy. The two-piece syringe-like tool, which includes a tube with corkscrew-type ridges around the outside and a dome-shaped top with a hole at the tip, can be used to squeeze Play-Doh to look like decorative cake frosting.
Complaints have been surfacing since at least November, when Tulsa, Oklahoma, TV station KTUL showed the tool to parents and asked them what they thought. The station blurred the image of the tool during the piece, saying it was due to parents’ reactions. One woman told the station it was “a pretty phallic cake-decorating piece.”[…]