Change: After the election is over, Wendy Davis admits she doesn't really support open carry... 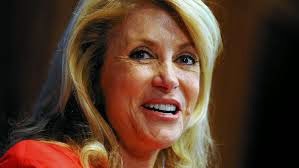 Democrats will say anything to get elected or pass laws they support. The truth is secondary to their goals. Be skeptical of what Republicans say and never believe anything a Democrat says.

Former Texas gubernatorial candidate Wendy Davis, in her first interview after losing by 20 points to governor-elect Greg Abbott, admitted she only claimed to support an open-carry gun law in order to win votes.
“There is one thing that I would do differently in that campaign, and it relates to the position that I took on open-carry,” Davis told the San Antonio Express-News on Monday. “I made a quick decision on that with a very short conversation with my team and it wasn't really in keeping with what I think is the correct position on that issue.”
Davis added that she does support “people’s right to own and to bear arms in appropriate situations,” but fears that open carry would be used “to intimidate and cause fear.”

Voters knew she was lying that's the reason why she didn't win the election.