Got insomnia? That's a gun seizing in New York... 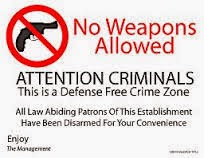 Anything is a reason to seize guns in New York and many states controlled by gun-hating liberals.


U.S. Navy veteran and retired police officer Donald Montgomery is suing New York Gov. Andrew Cuomo and other officials after his firearms were reportedly confiscated by police after he sought treatment for insomnia.
It all started after Montgomery visited his primary care physician on May 6 and complained about trouble sleeping, the Daily Caller reported. He claimed to have been suffering from insomnia since moving from a different state. Montgomery then returned to the hospital again days later for the same problems, except this time he was diagnosed with “Depression; Insomnia” by hospital staff.
On May 23, Montgomery returned to the hospital yet again with the same symptoms. He reportedly stayed at the hospital for 48 hours voluntarily for treatment.
Keep on reading…