Police use Doppler radar to determine if someone is in a house... 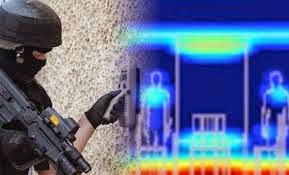 Technology is eroding our constitutional rights.


DENVER - Police usage of Doppler radar to detect whether someone is in a house could raise "grave Fourth Amendment questions," the 10th Circuit ruled Tuesday.
The case stems from the hunt by police for Kansas parolee Steven Denson. After Denson had stopped checking in with his probation officer while on release from a sentence for armed robbery, police used a utility bill to track him down and search his home.
Though Denson pleaded guilty to illegal possession of firearms, he preserved his right to appeal claims that the entry and search of his home were unlawful.
The 10th Circuit sided with the government but it acknowledged that the government's use of a Doppler radar device to detect whether someone was in the house was problematic.
Writing for the three-judge panel, Judge Neil Gorsuch noted that the cases forces the court confront, though not resolve fully, "how the Fourth Amendment interacts with the government's use of radar technology to peer inside a suspect's home."