Al Sharpton's daughter tries to shakedown NYC for $5 million over a sprained ankle... 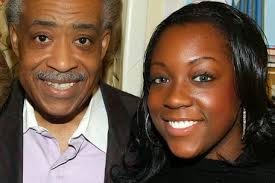 The acorn doesn't fall far from the tree...


She learned at the feet of a master.
Shakedown artist Al Sharpton’s eldest child wants $5 million from city taxpayers after she fell in the street and sprained her ankle, court rec­ords show.
Dominique Sharpton, 28, says she was “severely injured, bruised and wounded” when she stumbled over uneven pavement at the corner of Broome Street and Broadway downtown last year, according to a lawsuit.
Currently on vacation in Bali, the membership director for her gadfly dad’s National Action Network claims she “still suffers and will continue to suffer for some time physical pain and bodily injuries,” according to the suit filed against the city departments of Transportation and Environmental Protection.
“I sprained my ankle real bad lol,” she wrote in a post to Instagram after the Oct. 2 fall.

You would think that by the age of 28 someone could maneuver over uneven pavement.
Posted by Bluegrass Pundit at 10:06:00 AM