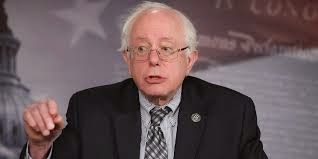 Where is Hillary on this proposal?


Vermont Sen. Bernie Sanders wouldn’t mind hiking taxes to an eye-popping 90 percent for wealthy Americans.
The socialist lawmaker — running against Hillary Clinton in the 2016 Democratic primary — told CNBC that he could get behind exploding tax rates back to levels not seen since the 1950s.
“[When] radical socialist Dwight D. Eisenhower was president,” Sanders said in an interview with John Harwood, “I think the highest marginal tax rate was something like 90 percent.”
“It was 90,” agreed Harwood. “When you think about 90 percent, you don’t think that’s obviously too high?”
“No,” Sanders replied. “What I think is obscene, and what frightens me is, again, when you have the top one-tenth of one percent owning almost as much wealth as the bottom 90.”
“Does anybody think that is the kind of economy this country should have?”