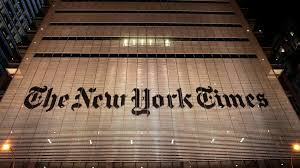 It was the New York Slimes!


The New York Times had first shot in 2014 at the video of Obamacare architect Jonathan Gruber mocking the “stupidity of the American voter,” but took a pass.
Though the Times eventually followed up on reports of the MIT economist’s now-infamous remarks on the passage of the Affordable Care Act, it did so only after they had generated a national scandal.
Times’ reporter Robert Pear was the “first real journalist” that tipster Rich Weinstein contacted with the newly unearthed footage, he told the Washington Examiner.
Weinstein met Pear at a conference in Washington, D.C., when he was trying to find a reporter who he could tip off to a separate Obamacare issue involving contracts between the Centers for Medicare & Medicaid Services and CGI Federal, the company that was brought on to build healthcare.gov.
“Nobody would listen to me,” Weinstein said, explaining that his earlier attempts to connect with media had been mostly unsuccessful. “So I was trying to contact journalists directly because I had this stuff.”