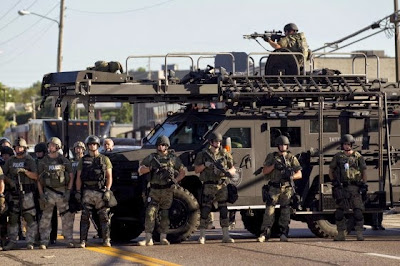 The other items on the list are not currently being supplied to police by the pentagon. Deception, thy name is Obama.

President Obama's new restrictions on transferring Defense Department equipment to local police, in reality, adds only one new piece of gear to the "banned" list: the bayonet.
Every other item on the "prohibited equipment list" released Monday was already a no-go for the Defense Department, a senior defense official told the Washington Examiner.
In 1999, the Pentagon banned the transfer of grenade launchers, which civilian law enforcement was using to fire tear gas. It banned transfer of tracked vehicles, predominantly the M113 armored personnel carrier, in 2011. The department continued prohibiting the transfer of .50 caliber or higher firearms and ammunition to local law enforcement since the intra-agency transfer program began in the early 1990s. The same went for weaponized aircraft and vessels, which were never provided.


Another item on the prohibited list, camouflage uniforms, hasn't been transferred by the Pentagon since 2008.
"The department was not providing a majority of the items on the list," said the senior defense official who asked not to be identified.

Not surprisingly, none of the mainstream media pointed this out, not even FOX News.