ISIS Leader al-Baghdadi: “Islam is the religion of war.” 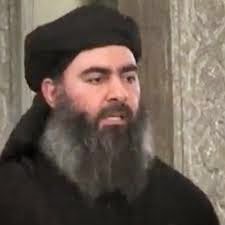 
ISIS’ Al-Furqan media today released new audio of an address by Abu Bakr al-Baghdadi, with written translations in English, Russian, Turkish, French and German.[...]
In the speech, Baghdadi calls on “every Muslim in every place to perform hijrah to the Islamic State or fight in his land, wherever that may be.”
“Do not think the war that we are waging is the Islamic State’s war alone. Rather, it is the Muslims’ war altogether. It is the war of every Muslim in every place, and the Islamic State is merely the spearhead in this war. It is but the war of the people of faith against the people of disbelief, so march forth to your war O Muslims,” he says. “March forth everywhere, for it is an obligation upon every Muslim who is accountable before Allah. And whoever stays behind or flees, Allah (the Mighty and Majestic) will be angry with him and will punish him with a painful torment.”
Baghdadi stresses that “whoever thinks that it is within his capacity to conciliate with the Jews, Christians, and other disbelievers, and for them to conciliate with him, such that he coexists with them and they coexist with him while he is upon his religion and upon tawhīd (monotheism), then he has belied the explicit statement of his Lord.”
“Islam,” he adds, “is the religion of war.”