While you weren't looking, the JV team took control of Ramadi... 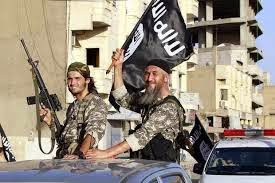 The reason you weren't looking is the mainstream media didn't point this disaster out to you.


BAGHDAD — Islamic State militants tightened their grip on Ramadi on Saturday as officials, police and residents accused the Sunni extremists of executing dozens of civilians and blowing up homes in the capital of Iraq’s largest province.
On Thursday, the insurgent group launched a brutal offensive involving car bombings and heavy shelling to seize Ramadi, which is about 80 miles west of Baghdad. The militants controlled most of the city by Friday afternoon, hoisting the group’s black flag over government buildings as pro-government forces retreated.
“They blew up the houses of the officers and [tribal] sheiks who fought them,” said Hamid Shandoukh, a Ramadi police colonel, speaking by telephone from the city’s Malaab area.
The attack is a significant setback to Iraq’s U.S.-backed government, which is waging a military campaign to retake territory that the Islamic State seized in sweeping advances last summer. The United States has assumed a prominent role in that effort, leading an international coalition that is conducting airstrikes against the extremist group in Iraq as well as in Syria.