Scary: Obama Foundation claims, “eight years is only the beginning.” 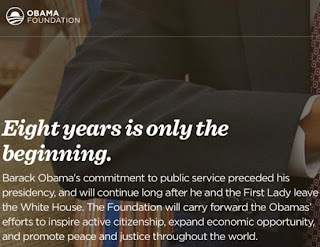 
With less than two years left in his presidency, President Obama’s post-White House planning is picking up steam with a promise that “eight years is only the beginning.”
In a new email to supporters, the Obama Foundation said it will soon announce where it will be headquartered after his presidency. It is expected to be linked to his presidential library which is slated for Chicago.
“Eight years is only the beginning. Barack Obama’s commitment to public service preceded his presidency, and will continue long after he and the first lady leave the White House. The foundation will carry forward the Obamas’ efforts to inspire active citizenship, expand economic opportunity, and promote peace and justice throughout the world,” said the email.

I guess this is good news for the countries that stone adulterous women to death. they will have another ex-President to buy support.
Posted by Bluegrass Pundit at 5:40:00 PM