Report: Chelsea Clinton is as unpleasant as her mother... 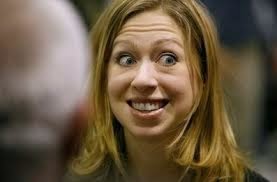 The acorn doesn't fall far from the tree. According to this report,  Chelsea is really unpleasant...


Chelsea Clinton is so unpleasant to colleagues, she’s causing high turnover at the Bill, Hillary and Chelsea Clinton Foundation, sources say.
Several top staffers have left the foundation since Chelsea came onBoard as vice chairman in 2011.
“A lot of people left because she was there. A lot of people left because she didn’t want them there,” an insider told me. “She is very difficult.”
Onetime CEO Bruce Lindsey was pushed upstairs to the position of chairman of the board two years ago, so that Chelsea could bring in her McKinsey colleague Eric Braverman.
“He [Braverman] was her boy, but he tried to hire his own communications professional and actually tried to run the place. He didn’t understand that that wasn’t what he was supposed to be doing,” said my source. “He was pushed out.”
Matt McKenna was Chelsea’s spokesman, and then he wasn’t. Now he works for Uber. Ginny Ehrlich, the founding CEO of the Clinton Health Matters Initiative, now works for the Robert Wood Johnson Foundation.
Chelsea has embraced all the trappings of a corporate CEO, with a personal staff almost as big as her father’s. “He has six. She has five,” said my source.
None of this would surprise her former co-workers at McKinsey and NBC News. At both the management consulting firm and the network, co-workers allegedly were told they couldn’t approach Chelsea.
A source at NBC, where Chelsea was paid $600,000 a year, said, “If someone wanted to talk to Chelsea about something, they had to go through a producer.”

I always thought she looked like "Mortimer Snerd" when she was a kid.