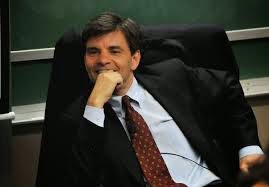 George Stephanopoulos will keep being a shill for Hillary Clinton.


George Stephanopoulos, the chief anchor of ABC News, apologized on Thursday for not telling viewers or his bosses about $75,000 in recent donations to the Clinton Foundation.
The revelations shocked many in the television news industry and prompted stern reactions from a number of prominent Republicans. Within hours, Stephanopoulos came out and said he would recuse himself from ABC’s planned Republican presidential primary debate, scheduled to take place next February.
“I don’t want to be a distraction,” he told CNNMoney, “so I’m not going to moderate that debate.”
However, Stephanopoulos said, “I am going to continue to cover the 2016 campaign.”
In a phone interview — perhaps intended to stem the damage done by the revelations — Stephanopoulos called the donations a mistake and reiterated his earlier apology.