Stupid: Two states still have laws on the books prohibiting you from pumping your own gas... 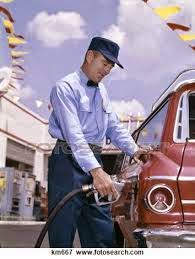 Chris Christie's New Jersey is one, but that may be changing. The other is the liberal mecca of Oregon.


If a New Jersey lawmaker has his way, Oregon could become the only state in the U.S. where it's illegal to pump your own gas.
On Friday, New Jersey Assemblyman Declan O'Scanlon (R-Monmouth) announced his plan for a phased-in approach to end the Garden State's decades-old ban on self-service gasoline.
According to NJ.com, the bill includes a provision to allow gasoline station employees to continue to fill customers' tanks if they so choose. Earlier this month, NJ.com reported that state officials hadn't enforced the self-service ban in at least two years.
"I'm amazed at how many folks raise this issue with me. It's the right thing to do, so we'll see," O'Scanlon told NJ.com.
Oregon's gas-pumping law has been on the books since 1951.

I can't remember the year I last had someone pump my gas. It was decades ago.
Posted by Bluegrass Pundit at 10:09:00 PM