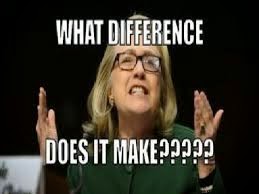 I am sure she slept well...


At the South Carolina Freedom Summit on Saturday, former U.S. Ambassador to the United Nations John Bolton said that Hillary Clinton was not fit to be president of the United States because she did not take necessary steps to protect Americans in Libya.
On the day that Ambassador Christopher Stevens, along with three other brave Americans, was killed in Benghazi, Bolton said that “not only was nothing done, the response of the administration was to go home. The president left the Oval office in the situation room to go to the residence. Hillary Clinton left the State Department to go home.”
Not once did Clinton call the secretary of defense to see what the status of the embassy was at that time. “She didn’t stay in a way the six secretaries of state that I worked for would have stayed. They would have stayed there all night to protect our people in danger overseas. Hillary Clinton went home. That act alone disqualifies her from being president of the United States,” Bolton exhorted.
Keep on reading…