Fail: WH blames Amtrak derailment on GOP not funding infrastructure. Train speed was over 100 in a 50 mph curve... 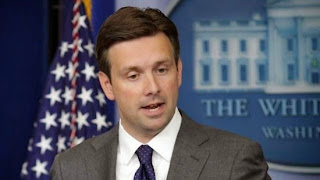 Josh Earnest would apologize if he had any character, but he doesn't.


Calling the Amtrak train derailment a “horrific incident,” White House Press Secretary Josh Earnest said investment in upgrades to the rail system’s infrastructure remain important to the administration. And President Obama, he said, has long advocated for Amtrak investments that would “benefit the traveling public.”
But Earnest was quick to note in his press briefing Wednesday that congressional Republicans have blocked such investments in the past.
“Unfortunately we have seen a concerted effort by Republicans for partisan reasons to step in front of those kinds of advancements,” Earnest said, noting that the cause of the crash is still under investigation, and it’s unclear whether infrastructure problems were involved.