Has the collapse of the tepid Obama recovery began? 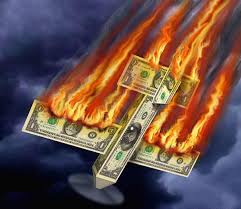 Well, to be honest, it wasn't much of a recovery anyway...

The United States economy got off to an even weaker start this year than first thought, the government reported Friday, as economic activity contracted because of a more dismal trade performance and continued caution by businesses and consumers alike.
The 0.7 percent annual rate of decline in economic output in the first quarter of 2015 was a reversal of the initial 0.2 percent advance for the period reported last month by the Commerce Department.
Although statistical quirks and one-time factors like wintry weather in some parts of the country played a role, as did a work slowdown at West Coast ports, the lackluster report for January, February and March underscores the American economy’s continuing inability to generate much momentum.

Email ThisBlogThis!Share to TwitterShare to FacebookShare to Pinterest
Labels: economy