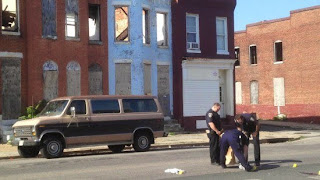 At least 27 shootings and eight deaths over Memorial Day weekend...


Baltimore has seen 27 shootings and eight deaths so far over Memorial Day weekend, as the month of May promises to be the most violent the city has seen this century.
“It is disheartening that we are seeing such an increase in violence, especially when we think about the progress that we’ve made,” Baltimore mayor Stephanie Rawlings-Blake told WJZ. “We’ve come too far to have this type of setback.”
The sharp uptick in violence coincided with the April 12 arrest of Freddie Gray. Gray, 25, died in police custody a week later. The case sparked rioting and looting in the city and nationwide protests over police brutality. Six officers involved in Gray’s arrest and transport were indicted last week by a grand jury. Charges include second-degree depraved-heart murder and manslaughter.
According to Baltimore Sun reporter Justin Fenton, crime in the city has reached levels not seen since 1999.
The city did not reach the 100 murder threshold until July last year.
Keep on reading

Email ThisBlogThis!Share to TwitterShare to FacebookShare to Pinterest
Labels: Baltimore