Man who killed bicycling Lexington lawyer was an illegal immigrant with 4 previous DUI arrests in 5 years... 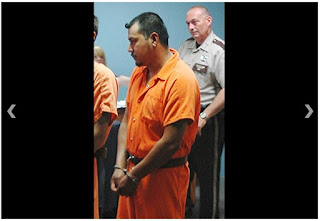 So, after multiple DUI's, this illegal immigrant was released on bond and never deported. He allegedly continued his drinking and driving and has now ended the life of an American. The blood is on Obama's hands.


Odilon Paz-Salvador, 29, who is from Mexico, allegedly struck Mark Hinkel, 57, on Saturday during the Horsey Hundred cycling event in Scott County. Paz-Salvador drove three miles after Hinkel landed in the bed of Paz-Salvador's truck before Georgetown police stopped him, police said.
Among the charges against Paz-Salvador is aggravated driving under the influence, making this his fourth aggravated DUI charge in five years.
There is no record of a Kentucky driver's license for Odilon Paz-Salvador, said Ann Stansel, records custodian for the Kentucky Transportation Cabinet.[snip]
Paz-Salvador pleaded guilty, making it his second conviction on an aggravated DUI charge, according to the documents.
Paz-Salvador was then turned over to U.S. Immigration and Customs Enforcement and placed into removal proceedings,(Note: This was about 2 years ago) Immigrations spokeswoman Gail Montenegro said Wednesday. But Paz-Salvador was released eight days later after posting bond, Montenegro said...

Note in italics is mine.

It has been estimated that illegal alien drunk drivers kill 13 people a day on average.
This is three times what we lost on average in even the worst year of the Iraq and Afghanistan war. You would think ending this would be a priority for Obama, but he has made a political choice to accept the American deaths from illegal immigrants to pander to Hispanic voters.