Think the last bailout was bad? How Does $3 trillion for unions sound? 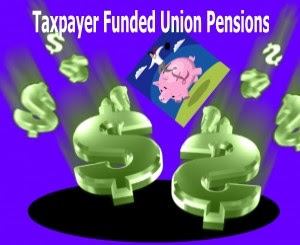 State government pension plans are in such bad shape, eliminating early retirement and raising the retirement age to 74 would still leave them $1 billion in the hole. If Democrats have any say, Federal taxpayers will foot the bill.

Labor groups will be invited to the U.S. Chamber of Commerce to talk about an alarming shortfall in state employee pension plans that some believe could lead to a new government bailout.

Randy Johnson, the Chamber’s senior vice president for Labor, Immigration and Employee Benefits, told The Hill the total shortfall for state pension funds could run as high as $3 trillion.

A Chamber spokesperson said the event is in the early stages of development and that it is unclear which unions would be invited to participate or when the session would be held.

The retire at 30 or retire at 20 if hazardous pension plans need to go the way of the dinosaur. We don't get that in private industry and don't want to pay for it with our taxes.