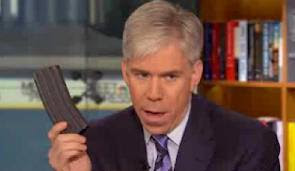 Let's hope he gets a year in prison...


Washington D.C. Police Chief Cathy Lanier has confirmed that the department is looking into allegations that NBC's David Gregory violated D.C.'s gun banning laws during a recent taping of Meet the Press.

In a discussion about gun control, host David Gregory brandished a 30-round magazine purportedly for an AR-15 or similar "assault rifle." The discussion took place on December 23, during the broadcast of NBC's Sunday morning political talk show.


It is also illegal to possess, sell or transfer any “large capacity ammunition feeding device.”  A person guilty of this charge can be sentenced to a maximum fine of $1000 and/or up to a year imprisonment.  D.C. Criminal Code 7-2506.01.