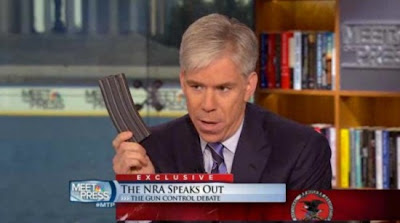 Being an Obama propagandist has it's rewards...


NBC’s David Gregory will interview President Obama on this Sunday’s Meet The Press, reversing earlier news that the host would be on vacation.

Gregory’s exclusive interview with Obama comes in the final hours before the deadline for the looming fiscal cliff and is the President’s first since September 20, 2009, during the health care reform fight.

Earlier this week, NBC News spokesperson Erika Masonhall told POLITICO that Gregory was on vacation and would not be hosting this week’s show.

Gregory has been the subject of a police investigation after he showed an empty gun magazine clip on air while interviewing the president of the National Rifle Association last Sunday. Officials at the Washington Metropolitan Police Department have called the action illegal. NBC News has not commented on the investigation.