Good News: Piers Morgan threatens to self-deport himself if we don't change out gun laws... 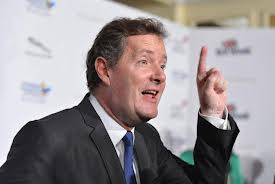 Message to Piers Morgan: "Don't let the door hit you in the butt on the way out."


I have fired guns only once in my life, on a stag party to the Czech capital Prague a few years ago when part of the itinerary included a trip to an indoor shooting range. For three hours, our group were let loose on everything from Magnum 45 handguns and Glock pistols, to high-powered ‘sniper’ rifles and pump-action shotguns.

It was controlled, legal, safe and undeniably exciting. But it also showed me, quite demonstrably, that guns are killing machines.

Rarely has the hideous effect of a gun been more acutely laid bare than at Sandy Hook elementary school in Newtown, Connecticut, two weeks ago – when a deranged young man called Adam Lanza murdered 20 schoolchildren aged six and seven, as well as six adults, in a sickening rampage. [...]

In conclusion, I can spare those Americans who want me deported a lot of effort by saying this: If you don’t change your gun laws to at least try to stop this relentless tidal wave of murderous carnage, then you don’t have to worry about deporting me.
Although I love the country as a second home and one that has treated me incredibly well, I would, as a concerned parent first – and latterly, of a one-year-old daughter who may attend an American elementary school like Sandy Hook in three years’ time – seriously consider deporting myself.

Ill help pack your bags and let my wife give you a farewell bj...

Well hell that the best news so far.. Might as well go before your so called "gun control" turns into a civil war. You wouldnt want to be around when that happens being that you "only shot a gun once in your life"

Gun Control?
Piers Morgan painted this wonderful picture of the low gun crime rate in the UK. He neglected to mention, the UK has the highest violent crime rate in Europe and even surpasses the US.
So do an internet search "what is the violent crime rate in the UK" you will find several articles that list the number of stabbings, deaths, beatings, rapes and so on. They are the highest in Europe and surpass the US. They don't use guns there to much, knives and other weapons seem to be the choice.
Reality Check:
Gun control is not stopping crime there.
Gun control will not stop crime here in the US
The White House need to address, the lack of Mental Health care, sticking a bandaid on this issue won’t help

"The Bill of Rights is the collective name for the first ten amendments to the United States Constitution. These limitations serve to protect the natural rights of liberty and property. They guarantee a number of personal freedoms, limit the government's power in judicial and other proceedings, and reserve some powers to the states and the public""The Bill of Rights plays a key role in American law and government, and remains a vital symbol of the freedoms and culture of our nation."