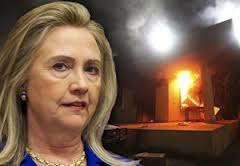 Really? Does the Obama administraion expect people to believe this?


Secretary of State Hillary Clinton will not be able to testify before House and Senate panels on the Benghazi issue due to concussion, Fox News learned Saturday.

Clinton was a scheduled to testify Thursday on the Sept. 11 attack on the U.S. Consulate in Benghazi, Libya, in which U.S. Ambassador Christopher Stephens and three other Americans were killed.