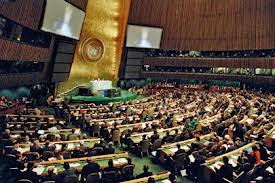 So Israel is a 22 times greater threat to world peace, security and human rights than Iran, Syria and North Korea? We really need to get out of the UN.


GENEVA, December 18 – The U.N. General Assembly today adopted nine resolutions on Palestinian rights and the Golan, sharply criticizing Israel yet making no mention of Sunday’s massacre of Palestinians by Syrian warplanes firing missiles into a mosque in a Palestinian refugee camp near Damascus. Nor did the texts mention the tens of thousands of Palestinians who continue to flee the camp.

By the end of this week, the current 2012 UNGA session will have adopted 22 country-specific resolutions on Israel – and only four on the rest of the world combined, one each for Syria, Iran, North Korea and Burma, noted UN Watch.

Today’s resolutions criticized Israel for “the continuing systematic violation of the human rights of the Palestinian people,” and focused on “the extremely difficult socioeconomic conditions being faced by the Palestine refugees in the Occupied Palestinian Territory, including East Jerusalem.