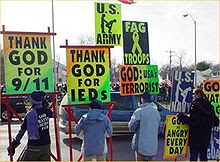 I am not usually on the same side as Anonymous, but I am giving them a pass on this one...


The Westboro Baptist Church is being attacked on all fronts after announcing it will picket Sandy Hook Elementary School in Connecticut, where 20 children and six adults were brutally murdered on Friday.

The "hacktivist" organization Anonymous has led the charge, releasing what it claims to be private information of members of the anti-gay, hate-mongering religious group.

"I've never heard of Anonymous, but somehow they got our personal info," Westboro Baptist Church and their leader Fred Phelps tweeted Monday. "That is OUR info, not yours to give out! God will deliver us."

Anonymous has also threatened to "destroy" the group in a new video and may also be responsible for taking down its website, according to Forbes.com.