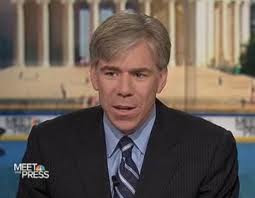 
David Gregory mocked the NRA’s Wayne LaPierre for proposing that armed guards be at every school in America. But the NBC host seems to have no problem with armed guards protecting his kids everyday where they attend school in Washington, D.C.

“You proposed armed guards in school. We’ll talk about that in some detail in a moment. You confronted the news media. You blamed Hollywood and the gaming industry. But never once did you concede that guns could actually be part of the problem. Is that a meaningful contribution, Mr. LaPierre, or a dodge?,” asked Gregory.

Later the host suggested that guns don’t prevent violence in schools (he cited the mass shootings at Columbine and Virginia Tech). “But you would concede that, as good as an idea as you think this is, it may not work. Because there have been cases where armed guards have not prevented this kind of massacre, this kind of carnage. I want you would concede that point, wouldn’t you?,” Gregory pleaded.

The NBC host would go on the rest of the segment to suggest that armed guards might not be effective in preventing mass murders at school. Which is perhaps an interesting theoretical argument.

But when it comes to Gregory’s own kids, however, they are secured every school day by armed guards.

The Gregory children go to school with the children of President Barack Obama, according to theWashington Post. That school is the co-ed Quaker school Sidwell Friends.

According to a scan of the school’s online faculty-staff directory, Sidwell has a security department made up of at least 11 people. Many of those are police officers, who are presumably armed.