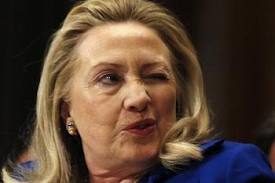 In October, Hillary Clinton said she's responsible for the security of American diplomatic outposts. Now, she has a very mysterious and convenient concussion.


WASHINGTON (AP) -- The leaders of an independent panel that blamed systematic State Department management and leadership failures for gross security lapses in the deadly Sept. 11 attack on a U.S. diplomatic mission in Libya will explain their findings to Congress on Wednesday.

The two most senior members of the Accountability Review Board are set to testify behind closed doors before the House and Senate foreign affairs committees on the classified findings of their harshly critical report.

An unclassified version released late Tuesday said serious bureaucratic mismanagement was responsible for the inadequate security at the mission in Benghazi where the U.S. ambassador and three other Americans were killed.