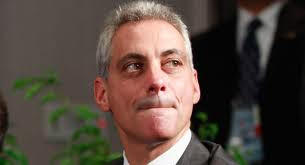 They compared him to a “Right Wing” employer....


Chicago Mayor and former White House Chief of Staff Rahm Emanuel is under attack by some of President Obama’s top political supporters.

The SEIU has committed half-a-million dollars to a new, anti-Rahm effort. The money was approved by a state council as part of a document titled “Taking on the millionaires’ mayor.” The document says SEIU will brand the Mayor as “the national poster child for Neo-Liberals who are hell-bent on adopting regressive policies.”

The SEIU also alleges the Mayor is adopting the tactics of “Right Wing” employers:
Mayor Emanuel is using the city’s procurement process to take advantage of a loophole in Obamacare to jettison the health care costs of many city contract work [sic].

Essentially, Rahm is doing the same thing to city contract workers that Applebee’s, Denny’s, Papa John’s Pizza and so many other Right Wing national employers have announced they are doing to their workers in the lead up to the implementation of Obamacare.