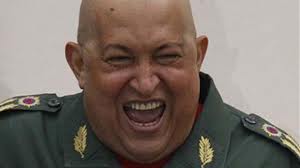 I am unable to find any sympathy...


"This process of recuperation ... will require a prudent time, as a result of the complexity of the surgical procedure, and also because of complications that came up in the surgery, when bleeding presented itself, requiring the adoption of corrective measures to permit its proper control," Information Minister Ernesto Villegas said in a televised address Thursday afternoon.

Vice President Nicolas Maduro said doctors had acted quickly to control the unexpected bleeding.
Speaking at a rally in northern Venezuela on Thursday evening, Maduro said Chavez's recuperation had "evolved from stable to favorable" but did not provide details about his long-term prognosis.

Rats. I was kinda hoping the bastard would die on the table. Oh well.