President Obama gives the ruling class an extra day off... 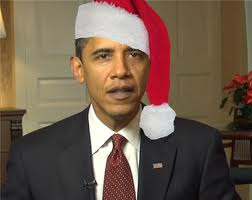 Federal employees already get 10 paid holidays in 2012. The number is now eleven. President Obama has given them Christmas Eve off.  Undoubtedly, they are exhausted after spending all those trillions of out tax dollars...


President Obama on Friday signed an executive order giving federal employees the day off on Christmas Eve, which falls on Monday.

Exceptions apply for employees asked by their departments and agencies to work for reasons of national security, defense or other public needs.

Most employees who are excused from duty Dec. 24 will receive the basic pay they would have received if no executive order had been issued. Workers who previously scheduled leave on Christmas Eve will not be charged that leave.