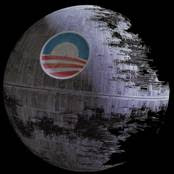 Someone in the Obama administration will now have to respond. Obama only needs $852,000,000,000,000,000 for construction. It would be the greatest job creating public works project of all time.


Our favorite of these petitions this month has to be from Colorado man “John D” who, as we reported last week, wants the government to secure resources and funding to begin the construction of a Death Star by 2016.
His rationale for building the mega-weapon from the ‘Star Wars‘ movies is as much public works project than direct threat to the little green men who could be living below Mars’ surface.
“By focusing our defense resources into a space-superiority platform and weapon system such as a Death Star, the government can spur job creation in the fields of construction, engineering, space exploration, and more, and strengthen our national defense,” he writes.

Petitions on the White House website require 25,000 signatures to be eligible for a response, and that number was exceeded today.

Email ThisBlogThis!Share to TwitterShare to FacebookShare to Pinterest
Labels: petition