Congratulations! You are going to pay one fifth the UN budget for the next three years... 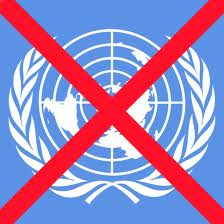 If our leaders had any sense, they would kick this ineffective and anti-American snake pit off American soil...


(CNSNews.com) – In one of its last actions of the year, the United Nations General Assembly on Christmas Eve agreed to extend for another three years the formula that has U.S. taxpayers contributing more than one-fifth of the world body’s regular budget.

No member-state called for a recorded vote, and the resolution confirming the contributions that each country will make for the 2013-2015 period was summarily adopted. The assembly also approved a two-year U.N. budget of $5.4 billion.

The U.S. has accounted for 22 percent of the total regular budget every year since 2000, and will now continue to do so for the next three years.

Email ThisBlogThis!Share to TwitterShare to FacebookShare to Pinterest
Labels: UN